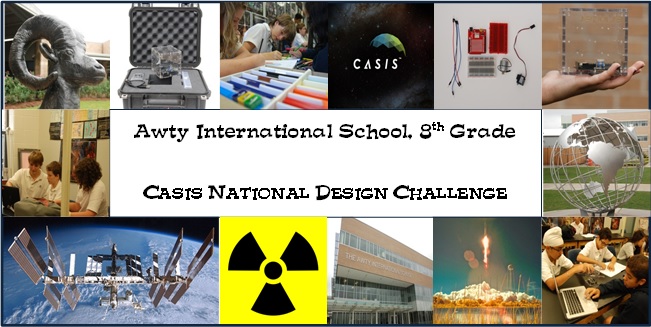 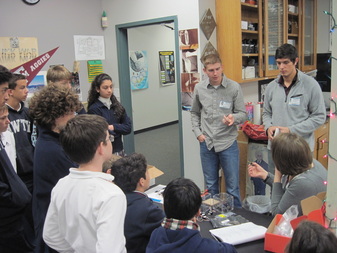 Colton and Austin, from Texas A&M, talk to the programming and engineering teams about the Ardulab box. 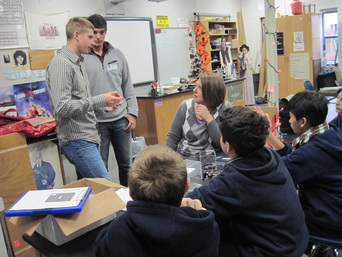 The students from the programming and engineering teams ask Colton and Austin if they have any ideas that will help the students construct the Ardulab. 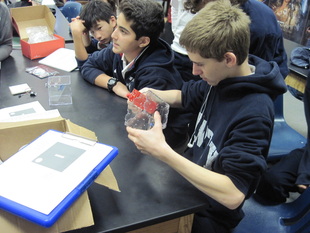 Jordan Penchas examines the Ardulab while Adham Metwalli listens to Colton and Austin. 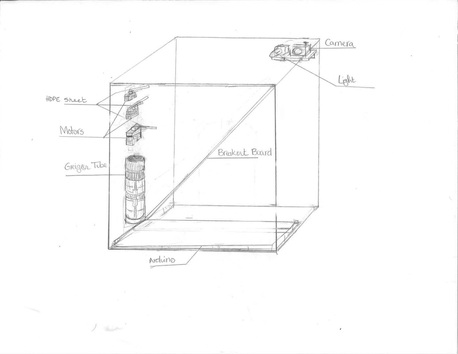 "In our design, the motors will rotate 90° every time we want to collect data. The sheets will be attached to their respective motors."
- The Engineering Team

These are the possible designs for our mission patch. 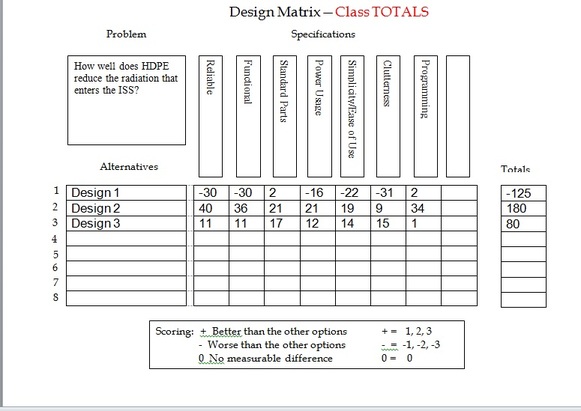 This chart represents the design matrix that the classes evaluated for each of the designs that had been created. Each of the 3 classes were broken into 6 groups each who then completed an evaluation and then the results were complied into this chart.

The obvious winner was design #2.

We made a pros and cons list for each design.  You can find it on the Documents Page :) 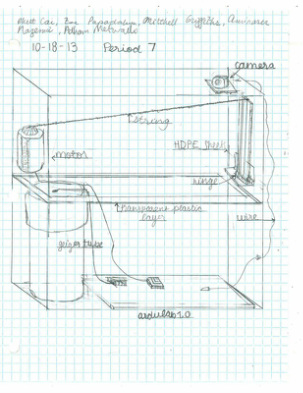 This week has mainly been focused on the Engineering Team.  They are going to apply a Design Matrix for the top three designs for the project.  As a class, we will also look at each of the three designs and look at the pros and cons of each designand decide on the final design for the project.
Also this week on Friday, Jordan Penchas and Ms. Glidewell were interviewed by Discovery Channel Canada for a possible TV segment. 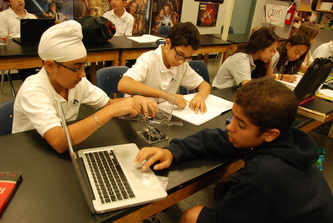 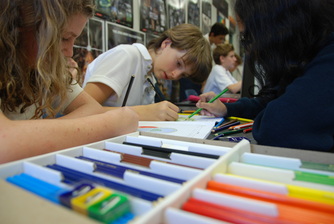 Artistic Group - the artistic group has been working on logos that will represent Awty in the experiment.  They are planning to take these logos and make patches that can be ironed onto the shirts and jackets.  They have many ideas and designs for the patches.  They plan to either combine what they think to be the three best patches and make one amazing one or pick the one they think is the best. 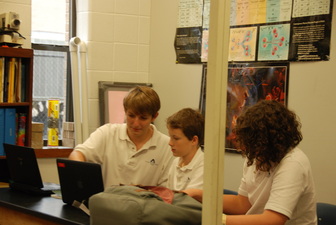 Programming Group - they are collecting data, such as codes, for the experiment.  They have found codes for the timer and how to collect data.  They are currently looking for codes that will control the camera, like turning the camera on and off automatically.
Portfolio Group - portfolio manegement has been very busy.  They have been organizing and thinking about everything that has to do with the experiment. On the first day, they were organizing all their information about the supplies they will need for the portfolio and what they will put in it.  They have been gathering tons of information from other groups.  For example, they have gathered blueprints from the engineering group and artwork and design from the artistic group for the portfolio.

Programming Group - they are collecting data, such as codes, for the experiment.  They have found codes for the timer and how to collect data.  They are currently looking for codes that will control the camera, like turning the camera on and off automatically.

Jordan Penchas was featured in WIRED Magazine Online this week. See the article below. 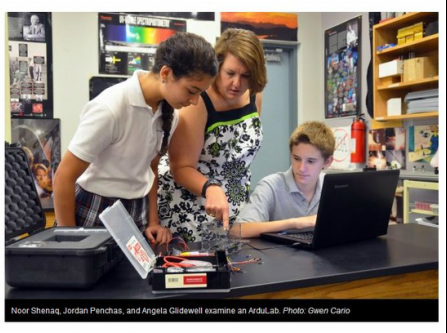 When Jordan Penchas started hacking some electronics hardware so he could play an absurdist surgery game with his Wii Nunchuk controller, he had no idea it would lead to a ride on the International Space Station.

Penchas is a 13-year-old eighth-grade student who lives in Houston, Texas. Late last year, a friend gave him an Arduino Uno — a $30 open-source computer motherboard that’s popular with the hardware hacking set — and at first, he used it as a kind of middleman between his Nunchuck and a game called Surgeon Simulator.

Typically, you play the game with keyboard. If you master certain keystrokes, you can remove virtual organs from virtual patients, often to twisted comic effect. But Penchas thought this was awkward and clumsy, so he used the Arduino to plug the Nunchuk into the game instead, and things got much easier. He even impressed his older brother.

But the next step is far more impressive. In June, his latest Arduino hack will end up on the International Space Station. His school, Awty International School, was one of three selected to try out a new type of space science kit. It’s called ArduLab, and basically, it lets Penchas and his classmates build experiments to run on the space station.

Created by a Silicon Valley startup called Infinity Aerospace, the programmable lab-in-a-box shows just how much open-source software can shake things up — even in space. NASA has long used things called CubeSats to run experiments in space, but Arduino further democratizes this sort of thing. It’s far cheaper and easier to use, putting the power in hands of people as young as Jordan Penchas.

Down on earth, hackers like Penchas can pre-program sensors and test equipment so that the Space Station astronauts don’t have to manually turn dials up in space. They can even remotely connect with their experiments. That’s a big deal because it leads to self-managed experiments in space, says Laura Colville an Education Specialist with the Center for the Advancement of Science in Space, the nonprofit group that manages the International Space Station’s U.S. laboratory. “The one critical thing up there is crew time,” she says.

The openness of the Arduino platform simplifies things for the programmers, she says. “Anyone can buy it. Anyone can download that software for free and use it.”

The 9 cm tall ArduLab starts at $2,000, while conventional CubeSat kits can run five times that price. For just $5,000, Infinity Aerospace plans to give you the kit plus a four-minute ride on XCOR’s Lynx suborbital rocket.

“With our offerings, any school… can transform its lab into a fully equipped space lab with guaranteed launch slots,” said Manu Sharma, one of Infinity Aerospace’s founders, in an email interview.

There are already hundreds of sensors and devices that work with Arduino, and the open source code that runs on the hardware is freely available for anyone to play around with.

Penchas and his fellow students are designing an experiment that will test the effects of graphene as a radiation shield and they also want to study the growth of algae in zero gravity. They’re still working out the details of their experiments, but whatever path they take, it’s almost certainly going to be a little easier, thanks to open source.

Penchas, like all little brothers, is pretty competitive with his older sibling. He still remembers the “look on his face of complete surprise” when his 17-year-old brother saw his Nunchuk hack.

He hopes to do even one better in space. “My one competitive up-move is that I’m a maker,” he says. 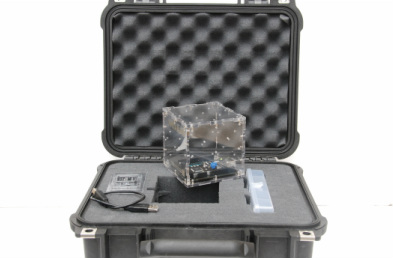